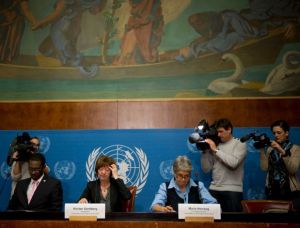 NEW YORK, February 5 (C-FAM) The Vatican accused a UN committee of interfering with Church doctrine and violating religious freedom after it was asked to change its teaching on abortion and homosexuality.

The Church should change its teaching on abortion, according to a UN committee that monitors the rights of children. The Church should no longer automatically excommunicate those who perform or assist in the performance of an abortion, the UN experts said in observations published Wednesday following a year-long review of the Vatican’s child protection practices.

The Vatican immediately issued a press release saying that UN experts cannot interfere with Catholic doctrine on human dignity or the Church’s exercise of religious freedom.

Archbishop Silvano Maria Tomasi, who represents the Vatican at the United Nations in Geneva, told Vatican Radio his first reaction to the observations was surprise.

The committee took a negative approach and was “very wrong”, he said with consternation, “the Church cannot simply give up its beliefs” because all Church teaching on human dignity is ultimately geared towards preserving the common good.

The committee’s observations “contradict the spirit and letter of the Convention on the Rights of the Child,” Tomasi added. The treaty preamble in fact states that children should be protected before and after birth.

He lamented that the committee failed to take note of how advanced child protection mechanisms in local churches throughout the world have become in response to child abuse scandals involving clergy. He said the Church is now a “leader” on best practices for the protection of children.

Tomasi said the observations of the committee were not up to date — a polite way of saying the committee did not do its job properly.

The Vatican sat down with the same UN experts last month to discuss the work of the Vatican to protect children under the Convention on the Rights of the Child, which the Vatican has ratified. The very same issues that came up in the observations published this week had been addressed thoroughly at that meeting.

Tomasi believes the committee’s observations were prepared in advance of that meeting and disregarded what was discussed at the meeting — a serious accusation.

It is not the first time UN committees are accused of not performing their duties. UN experts have been criticized multiple times for letting UN bureaucrats carry out their work under the influence of organizations that promote abortion and homosexuality and other politically charged causes.

The controversial observations of the committee could not have come at a worst time in monitoring committees more broadly. The work of UN committees that monitor human rights is currently being scrutinized by the General Assembly. A code of conduct to make experts more accountable is one of the proposals put forward in the General Assembly.