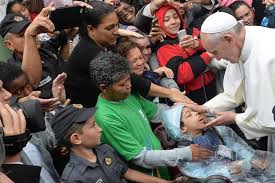 Greece’s opposition leader Alexis Tsipras – a radical leftist and self-described atheist – has hailed Pope Francis as the “pontiff of the poor” after meeting him for talks at the Vatican.

The Greek firebrand, among the loudest critics of the politics of austerity, emerged from discussions with the pope saying the two men had seen eye-to-eye on such issues as banks, profits and the need for Europe’s left to deepen dialogue with the church. “We come from different ideological starting points,” said Tsipras, Europe’s first leftwing leader to be invited to the Vatican. “But we meet on [the matter] of pan-human values.”

The dialogue had ranged from Europe’s economic crisis, the wars in the Middle East and Ukraine, the gulf between rich and poor and the tragedy of uncontrolled migration, he said.

The Argentinian-born pontiff agreed to meet the politician after months of clandestine negotiations between European leftists and the Holy See.

Tsipras, 39, who stood as the bloc’s candidate for EU commissioner in the European elections, and whose Syriza party is leading polls in Greece, presented the pope with an olive branch, the symbol of peace. In return, Pope Francis, 77, gave Tsipras a copy of his apostolic exhortation, the Joy of the Gospel, outlining what some have described as his radical views on the church’s role in the modern world.

“It was a meeting of the like-minded,” said Panos Skourletis, Syriza’s spokesman. “The pope has a disposition for dialogue with people of other backgrounds, outside the church. He believes in dialogue between the church and the left.”

Tsipras did not waste the opportunity to explicate the inequities of austerity, particularly in Greece, long at the forefront of the EU’s financial crisis. “I had the chance to convey the picture that exists at this time in Greece. To tell him that after four years of impasse and unfair austerity policies, the majority of Greek people are paying [a great price] while at the same time banks are being saved,” he said.

The pope, who experienced Argentina’s economic collapse first hand when he was bishop of Buenos Aires, was reportedly sympathetic, agreeing that reining in budget deficits through whip-lashing austerity was the wrong course to take. “You young politicians speak a different language that resembles a melody of hope,” he was quoted as saying during the talks.

Tsipras’s seeming conversion to being a fervent admirer of the church has not passed without comment. This summer, he made a two-day visit to the all-male monastic republic of Mount Athos in what many described as a desperate bid to improve ties with the Greek Orthodox church and boost his mainstream credentials. But the politician, who has steadfastly refused to marry the mother of his two young children in a religious service, insisted on Thursday that the time had come for the European left to build bridges with the institution.

“We agreed on the need to continue the dialogue between the European left and the Christian church,” he said. “There is a need to create an ecumenical alliance against poverty, inequalities, against the logic that markets and profits are above people.”