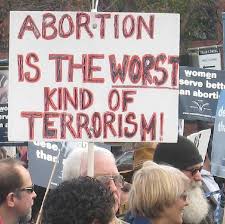 ….
This has been on my heart lately, and an anonymous phone call I received this morning helped solidify my thoughts.When Archbishop Amato called abortion “terrorism with a human face” in April 2007 he caused me to think: How is abortion terrorism?

Terrorism in the modern sense is 1.) violence or 2.) other harmful acts committed (or threatened) against civilians 3.) for political or other ideological goals (http://en.wikipedia.org/wiki/Terrorism).

All of those elements are present in abortion:

A healthy, growing human being is killed and forcibly removed from her mother’s womb. This has happened more than 48,000,000 times in America since 1973, more than four times the death toll from the Nazi Holocaust and 39 times the number of American casualties (combat and non-combat) from all of the wars we have ever fought as a nation.

Abortion kills women. Hundreds of women have died while going through a so-called “safe, legal” abortion (visit the “Blackmun Wall” to see the stories of 347 women who died during an abortion: http://www.lifedynamics.com/Pro-life_Group/Botched_Abortion/)).

Abortion kills motherhood. It makes the womb a terrorist war zone. No longer is the womb the most sacred, safe place. Gone is the nurturing love of a mother for her child. Now the woman suffers from emotional and psychological trauma. The mother who would normally give her life to save her child has given her child’s life to “save” herself.

Abortion kills manhood. Every act of abortion involves a man. When the father of the child should be there, supporting and protecting the child and her mother, he either abandons them or, even worse, forces the mother to kill their innocent child. Abortion kills a man’s conscience and turns him into a sexual predator.

Abortion kills relationships. It destroys marriages, not only when spouses choose to abort their children, but also in future marriages because it kills respect for one another and wounds so deeply.

Abortion kills humanity. When children, women, womanhood, manhood, and relationships are destroyed, there is nothing left for humanity. Abortion leaves us morally bankrupt. It tears apart the fabric of society. As Pope John Paul II once said with a voice quivering with emotion, “A nation which kills its own children is a nation without hope.”

2. Harmful Acts are Threatened: Women in crisis pregnancies are often threatened to have an abortion. Lawmakers and the general public are threatened that if they do not allow abortion all kinds of bad things will happen.

In most cases of statutory rape or incest where a child is conceived, a woman is severely threatened by the perpetrator to get an abortion and is given no choice. She is literally terrorized by the male aggressor and often continues to be victimized by him long after an abortion is committed.

Women are also threatened by today’s media. They send her messages like:

+ “You’re too young to have a baby; your life will be ruined.”
+ “How are you going to finish school? What will this do to your career?”
+ “You’re dirty for getting pregnant, no one will like you any more.”
+ “You’ll never be able to afford having a child.”
+ “You’ll never find someone to marry you if you’re taking care of a child.”
+ “What’s in your womb is your property to dispose of as you wish.”

Lawmakers and the general public are threatened by those pushing the abortion agenda. They are told that if they outlaw abortion, crime and poverty will rise, more people will be starving and homeless, the environment will be destroyed, disease and pestilence will be more prevalent, and on and on. They are also threatened that if they infringe upon the “right” of a woman to have an abortion, all of our rights will be trampled.

3. For political or other ideological goals: It was stated by Margaret Sanger, founder of Planned Parenthood (the nation’s largest abortion provider and lobbying organization), that “The most merciful thing that a large family does to one of its infant members is to kill it.” Margaret Sanger, Women and the New Race (Eugenics Publ. Co., 1920, 1923). She also referred to immigrants and poor people as “…human weeds,’ ‘reckless breeders,’ ‘spawning… human beings who never should have been born.” Margaret Sanger, Pivot of Civilization.

It is clear that the secular humanists are using abortion as a terror tactic to advance their own agenda and ideological goals. The Humanist Manifesto II calls abortion a right that allows people to express sexual behavior between consenting adults. Without abortion, their “sexual rights” are repressed, so they work tirelessly to make abortion legal everywhere and at any time. It is interesting to note that Betty Frieden, founder of the National Organization of Women, and Alan Guttmacher, former president of Planned Parenthood, were signatories to the Humanist Manifesto II.

As a nation, we must declare war against the terrorism of abortion and eradicate it, just as slavery was eradicated in the 19th century. To do less will result in the collapse of our nation.