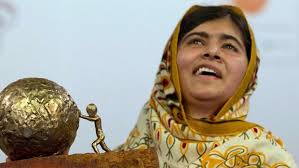 (Reuters) – Pakistani teenager Malala Yousafzai, who was shot in the head by the Taliban in 2012 for advocating girls’ right to education, and Indian campaigner against child trafficking and labor Kailash Satyarthi won the 2014 Nobel Peace Prize on Friday.

They were picked for their struggle against the oppression of children and young people, and for the right of all children to education, the Norwegian Nobel Committee said.

The sharing of the award between an Indian and a Pakistani came after a week of hostilities along the border of the disputed, mainly Muslim region of Kashmir – the worst fighting between the nuclear-armed rivals in more than a decade.

“The Nobel Committee regards it as an important point for a Hindu and a Muslim, an Indian and a Pakistani, to join in a common struggle for education and against extremism,” said Thorbjoern Jagland, the head of the Norwegian Nobel Committee.

Kristian Berg Harpviken, head of the Peace Research Institute in Oslo, described the joint award “an innovative prize that brings attention to the problems of the young”.

Satyarthi said he hoped to work with Yousafzai for peace.

Yousafzai later told reporters in the English city of Birmingham where she now lives that she had spoken by telephone with Satyarthi on Friday and they had agreed to invite the prime ministers of India and Pakistan to the ceremony in December.

“The tension that is going on is really disappointing and I’m really sad because I want both countries to have dialogue to have talks about peace,” she said.

Yousafzai said she had found out about winning the Nobel Peace Prize on Friday from a teacher during a chemistry lesson, adding that the news had come as a big surprise.

“This is not the end of this campaign which I have started. I think this is really the beginning. I want to see every child going to school,” she said, adding she felt “really honored”.

“A BREATH OF FRESH AIR” AMID VIOLENCE

Yousafzai was attacked in 2012 on a school bus in the Swat Valley of northwest Pakistan by masked gunmen as a punishment for a blog that she wrote for the BBC’s Urdu service as an 11-year-old to campaign against the Taliban’s efforts to deny women an education.

Unable to return to Pakistan after her recovery, Yousafzai moved to England, setting up the Malala Fund and supporting local education advocacy groups with a focus on Pakistan, Nigeria, Jordan, Syria and Kenya.

“This is a breath of fresh air, a gift for Pakistan, at a time when we are embroiled in terrorism and violence and wars,” Shah told Reuters by telephone from the Swat Valley.

“Those who oppose her, extremist elements or whoever else, they have been rendered irrelevant. They are a weak minority.”

Yousafzai addressed the U.N. Youth Assembly last year at an event Secretary-General Ban Ki-moon called “Malala Day”. This year she traveled to Nigeria to demand the release of 200 schoolgirls kidnapped by the Islamist group Boko Haram.

“To the girls of Nigeria and across Africa, and all over the world, I want to say: don’t let anyone tell you that you are weaker than or less than anything,” she said in a speech.

Satyarthi, who gave up a career as an electrical engineer in 1980 to campaign against child labor, has headed various forms of peaceful protests and demonstrations, focusing on the exploitation of children for financial gain.

“It is a disgrace for every human being if any child is working as a child slave in any part of the world,” Satyarthi said. “I feel very proud to be an Indian that in India I was able to keep this fight on for the last 30 years or so. This is a great recognition and honor for all my fellow Indians.”

In a recent editorial, Satyarthi said that data from non-government organizations indicated that child laborers could number 60 million in India – 6 percent of the total population.

“Children are employed not just because of parental poverty, illiteracy, ignorance, failure of development and education programs, but quite essentially due to the fact that employers benefit immensely from child labor as children come across as the cheapest option, sometimes working even for free,” he wrote.

Last month, based on a complaint filed by his organization in a Delhi court, the Indian government was forced to put in place regulations to protect domestic workers who are often physically and sexually abused and exploited.

Satyarthi joins a handful of Nobel Peace Prize winners with ties to India – even though the most famous peace activist of them all and father of independent India, Mahatma Gandhi, never received the honor.

Mother Theresa, an Albanian-born nun, was recognized in 1979 for her work with the poor in the Indian port city of Calcutta. The Dalai Lama, the exiled Tibetan spiritual leader who won the prize in 1989, resides in India.

Many commentators say that the omission of Gandhi from the list of laureates is the biggest error in the history of the Prize, first awarded in 1901.

“Maybe there is a little nod to Gandhi there,” Harpviken said of the award to India’s Satyarthi.

The United Nations’ Childrens’ Fund in South Asia said the joint award recognized “their struggle against the suppression of children and young people” in a region where nearly 17.5 million girls aged between 5 and 13 are out of school and over 12 percent of children between 5 and 14 are engaged in labor.

The prize, worth about $1.1 million, will be presented in Oslo on Dec. 10, the anniversary of the death of Swedish industrialist Alfred Nobel, who founded the award in his 1895 will.

The previous youngest winner was Australian-born British scientist Lawrence Bragg, who was 25 when he shared the Physics Prize with his father in 1915.

(Additional reporting by Terje Solsvik, by Krista Mahr, Douglas Busvine and Nita Bhalla in NEW DELHI and by Maria Golovnina and Mehreen Zahra-Malik in ISLAMABAD; Writing by John Chalmers; Editing by Angus MacSwan and Gareth Jones)