Pope denounces euthanasia as ‘sin against God and creation’ 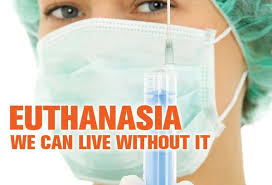 Pope Francis denounced euthanasia as a “sin against God”.

VATICAN CITY: Pope Francis has denounced the right to die movement, saying it’s a “false sense of compassion” to consider euthanasia as an act of dignity when it’s a sin against God and creation.

Pope Francis made the comments to the Association of Italian Catholic Doctors on Saturday.

Earlier this month, the Vatican’s top bioethics official condemned as “reprehensible” the assisted suicide of an American woman, Brittany Maynard, who was suffering terminal brain cancer and said she wanted to die with dignity.

While denouncing euthanasia in general, he also condemned abortion, in vitro fertilisation (or “the scientific production of a child”) and embryonic stem cell research (or “using human beings as laboratory experiments to presumably save others.”)

“This is playing with life,” he said.

“Beware, because this is a sin against the creator, against God the creator.”

While shying away from hot-button, culture war issues such as abortion, Pope Francis has spoken out frequently about euthanasia.

He considers the assisted suicide movement as a symptom of today’s “throw-away culture” that views the sick and elderly as useless drains on society.

Pope Francis urged doctors to take “courageous and against-the-grain” decisions to uphold church teaching on the dignity of life, even if it requires resorting to conscientious objection.