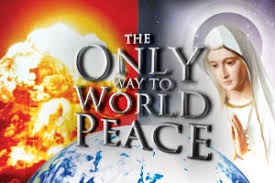 The U.S. State Department is revving up its efforts to work with the Holy See

The Vatican has long opposed nuclear weapons, but Pope Francis is making the cause one of the top diplomatic priorities of his two-year-old papacy.

In December, the Vatican submitted a paper calling for total nuclear disarmament to the Vienna Conference on the Humanitarian Impact of Nuclear Weapons. In January, Pope Francis touted nuclear disarmament as a major goal alongside climate change in his speech to the Vatican’s diplomatic corps. And on Easter Sunday, he publicly prayed that the prospective multi-nation deal to halt Iran’s nuclear weapons program would be “a definitive step toward a more secure and fraternal world.”

Many observers expect the Pope to raise the topic in his speech to the United Nations in September, especially as that event also commemorates the 50th anniversary of Pope Paul VI’s historic U.N. speech calling for “never again war, never again war.”

“Pope Francis has recently pushed the moral argument against nuclear weapons to a new level, not only against their use but also against their possession,” Archbishop Bernedito Auza, the Holy See’s Ambassador to the U.N., says. “Today there is no more argument, not even the argument of deterrence used during the Cold War, that could ‘minimally morally justify’ the possession of nuclear weapons. The ‘peace of a sort’ that is supposed to justify nuclear deterrence is specious and illusory.”


The Vatican push on nuclear weapons comes as the United States is in the final stages of negotiating a deal with Iran and as 190 parties that have supported the Nuclear Nonproliferation Treaty prepare for its five-year review. The upcoming NPT RevCon, as the U.N. treaty review conference is called, is the first NPT review during the Francis papacy, and Francis’ voice is already adding moral and political weight to the conversation. The Holy See, a party to the Treaty, has opposed the possession and use of nuclear weapons since the beginning of the nuclear age.
The Holy See is “very concerned,” Auza adds, about nuclear-capable states’ commitment to disarmament, arguing that the central promise of the treaty remains unfulfilled. “The fact that nuclear-possessing States not only have not dismantled their nuclear arsenals but are modernizing them lies at the heart of nuclear proliferation,” he says. “It perpetuates the ‘injustice’ in the NPT regime, which was supposed to be temporary while nuclear disarmament was in progress…. how could we reasonably convince the pre-NPT non-nuclear countries not to acquire or develop nuclear arms capabilities? Now, the real and present danger that non-state actors, like terrorist and extremist organizations, could acquire nuclear weapons ‘in the black market’ and ‘not-so-black market,’ ‘in the back alleys’ and ‘not-so-back alleys’ should terrify us all.”
On Thursday, two events on opposite sides of the planet signaled Pope Francis’ diplomatic reach ahead of the NPT review. In New York at the United Nations’ headquarters, the Holy See’s Mission to the U.N. and the Global Security Institute hosted a conference of diplomats and interfaith partners to promote the abolition of nuclear weapons. At the Vatican, a United States diplomatic delegation was courting Catholic Church leaders on President Obama’s commitment to nuclear disarmament.
Under Secretary of State for Arms Control and International Security Rose Gottemoeller has picked up on the Vatican’s keen interest in nuclear disarmament and has made it a priority to engage the Holy See. Gottemoeller first visited the Vatican in January to discuss arms control and nonproliferation issues with several counterparts. In late March, the State Department invited the Holy See to participate as an observer in its new disarmament verification initiative, the International Partnership for Nuclear Disarmament Verification. This week, Gottemoeller returned to the Vatican with Madelyn Creedon, the Department of Energy’s principal deputy administrator for the National Nuclear Security Administration, for a two-day diplomatic visit.
Gottemoeller’s efforts have centered on briefing the Vatican on the United States’ disarmament agenda. She has been working to reach highest-level counterparts, as well as technical experts and non-governmental experts. “President Obama from the very beginning of his term in office has been very clear that his goal is to proceed with nuclear disarmament,” she says. “People think sometimes that that is just a kind of propaganda slogan out there without a lot of ‘there’ there, so I wanted to make sure that our Vatican counterparts knew the degree to which the President’s Prague initiative has become substantively a very significant part of our national policy.”

The United States knows the political capital Pope Francis holds when it comes to national and international decision-making. Most notably, the White House credited Francis for his role in brokering the U.S.-Cuba deal in December. “I think there is a huge moral impact of the Vatican on issues that relate to nuclear weapons deterrence and the disarmament agenda overall,” Gottemoeller says. “I see it is as a confluence of interest in a very positive sense. … You can’t just wave a magic wand and make nuclear weapons go away. It takes hard work and it takes a lot of very practical steps, but we can get there, and that is the President’s message. I just hope that we will be met by patience from the community trying to work on these issues.”
For Francis, nuclear disarmament—like most everything—must be viewed from the position of the poor instead of the position of the powerful. Inequality and nuclear power are interwoven. “Spending on nuclear weapons squanders the wealth of nations,” Pope Francis wrote to the Vienna Humanitarian Conference in December. “To prioritize such spending is a mistake and a misallocation of resources which would be far better invested in the areas of integral human development, education, health and the fight against extreme poverty. When these resources are squandered, the poor and the weak living on the margins of society pay the price.”
The United States Conference of Catholic Bishops (USCCB) has also been deepening its theological and political attention to disarmament. Bishop Oscar Cantú of Las Cruces, New Mexico, chairman of the USCCB’s Committee on International Justice and Peace, spoke at the Holy See’s U.N. panel. During the NPT RevCon, the USCCB plans to sponsor an event with the Kroc Institute on evolving Catholic perspectives from nuclear deterrence to disarmament. Stephen Colecchi, director of the USCCB’s Office of International Justice and Peace, says that the USCCB is trying to move the Holy See’s moral discussion forward in the U.S.—the USCCB had a close relationship with the Administration during the time of the New START Treaty, and has continued the dialogue with Gottemoeller, who is Catholic. “We certainly urge the United States to work with Russia and we have been urging them to separate the issue of the day, which is Ukraine, from the issue of the decades, which is nuclear disarmament,” Colecchi says. “Deterrence is even less stable in a multipolar world. We might ask, Are nations, including our own, serious about nuclear disarmament if they are modernizing nuclear weapons systems?”
After a period of denuclearization in the wake of the fall of the Soviet Union, several states in the developing world went nuclear and events recently have further undermined the NPT. U.N. Ambassador Libran Cabactulan of the Philippines—who was the president of the previous NPT RevCon—flew in from Manila to speak at the Holy See’s event at the U.N. on Thursday. “Nothing has been achieved. Nothing much,” Cabactulan told the U.N. gathering, describing the progress of disarmament in the last five years. “What perhaps I achieved, that was calling more on temporal power, and maybe I failed, because in the order of things it’s the tally sheet, what has been done. And that is why I am gratified…to have spiritual leaders.”
Ambassador Antonio Patriota, permanent representative of Brazil to the United Nations, believes that Francis’ position will resonate during the NPT review conference. “He himself coming from South America, we feel that he has a very deep understanding of the challenges posed by inequality,” Patriota says. “His words carry quite a bit of political weight. It is a powerful message from man of high moral standing in a time when leadership is scarce.”