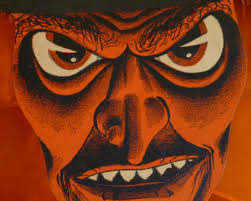 THE gargoyle witches of Grimm’s fairytales, who kidnapped children and fattened them up to eat, served the purpose of warning tender hearts about the evil ever-present in our world.
As adults we still treat evil as the realm of alien monsters, consoling ourselves with the fiction that the butchers of Islamic State or Nazism or communism are not fully human, with people who love them and lives of normality outside their vile deeds.

Hitler, for instance, was a vegetarian who cared deeply about the welfare of animals.
Aleksandr Solzhenitsyn once wrote that the line separating good from evil “passes not through states, nor between classes, nor between political parties either — but right through every human heart”.
In other words, all of us are capable of evil. It may be easier to think of evil as something foreign to ourselves. But it has a way of creeping into every complacent society, through every complicit heart.
Take the grotesque practices of one of the world’s largest abortion providers, Planned Parenthood, exposed in an undercover sting as selling the livers, brains and hearts of aborted babies for $30 to $100 a pop.
This is not just another wacky story from America to dismiss. We are deeply implicated, both because Australian researchers also use foetal tissue, whose provenance is opaque, and because we provide more than $30 million in foreign aid to the international arm of Planned Parenthood, for “reproductive health” activities in the Pacific and Asia.
You can see just what those “reproductive health” activities entail in two sickening undercover videos released by the US pro-life group, the Centre for Medical Progress.
Senior Director of Medical Services, Dr Deborah Nucatola is shown haggling over the sale of “intact” body parts over lunch with two actors she ­believes are from a “foetal tissue procurement” company.
In between forkfuls of lettuce and swigs of red wine, ­Nucatola says: “A lot of people want intact hearts these days … as many intact livers as possible … some people want lower extremities too … We’ve been very good at getting heart, lung, liver, because we know that, so I’m not gonna crush that part. I’m going to basically crush below, I’m gonna crush above, and I’m gonna see if I can get it all intact.”
Then there is stony-faced Dr Mary Gatter, another Planned Parenthood medical director, who offers to use “a less crunchy technique to get more whole specimens”. Consent from the patient for this altered technique she describes as a “specious little argument”.
Gatter is recorded negotiating $100 per body part. “I want a Lamborghini,” she quips.
Planned Parenthood claims it gains “no financial benefit”, other than to cover its costs, and is simply “helping” ­patients who want to “donate tissue … with full, appropriate consent under the highest ethical and legal standards”.
The videos show abortion for what it is, not the sanitised fiction of the pro-choice movement, but the messy ending of a life, the crushing of a tiny body with a beating human heart and other organs desired by the medical research industry.
This secretive traffic in foetal body parts is a global business, and it occurs in Australia. Rare detail is found in a 2003 article in the Medical Journal of Australia, titled, “Use of human foetal ?tissue for biomedical research in Australia”.
An average of 108 aborted foetuses a year were “obtained” between 1994 and 2002: “19 separate biomedical researchers at 12 separate Australian institutions (four universities, six major teaching hospitals and two research ­institutes) used human foetal tissue in their research”.
The abortions were performed between eight and 20 weeks, and “the most commonly used tissues were eye (23%), bone/cartilage (23%), brain/spinal cord (22%), kidney (15%) and pancreas (8%).”
As in America, sale of foetal tissue here is illegal, but there is no transparency about the arrangements between abortion clinics and researchers, despite warnings from the ­National Health and Medical Research Council that “financial or contractual … conflict of interest” must be “managed”.
Alarmed by the prospect of similar abuses here, the Australian Christian Lobby has called on parliament to “investigate the use and possible sale of human foetal tissue”.
Then there is the not inconsiderable matter of taxpayer funding of the International Planned Parenthood Federation: $651,801 for “core funding to strategic plan (Asia)”, $769,800 “Contribution to IPPF (global)” and $30 million to “Pacific Regional Partnerships for Reproductive Health Program (Pacific)”.
NSW MP Fred Nile wants funding stopped: “The Australian Government is aiding the organisation’s unethical, inhumane practice of utilising foetal tissue as a commodity and for monetary gain.”
But the response of the government is just business as usual.
“These allegations … do not relate to DFAT’s funding of International Planned Parenthood Federation,” a spokesperson for the Department of Foreign Affairs said yesterday.
“DFAT contributes funding to IPPF as part of the global effort to reduce the unmet need for quality reproductive health care services in developing countries … IPPF must ensure its activities comply with the relevant country’s laws, including in relation to abortion”.
Sorry, that’s not good enough.
If the live cattle trade can be shut down overnight on the strength of undercover videos taken by animal rights activists, at the every least our government should review its funding of Planned Parenthood’s international affiliate, and seek assurances that foetal body parts are not being sold off.
Our consciences cannot remain forever anaesthetised to evil done in our name.
More Sharing ServicesShare |