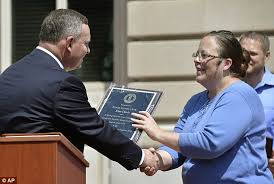 Kentucky county clerk Kim Davis says a private meeting with Pope Francis has inspired her -– and given her a renewed sense of purpose.

“I was crying. I had tears coming out of my eyes,” Davis said in an exclusive interview with ABC News. “I’m just a nobody, so it was really humbling to think he would want to meet or know me.”

Davis, who refused to issue marriage licenses to same-sex couples, says the private meeting occurred during the pope’s historic trip to the United States. After receiving a surprise phone call from a church official, the Kentucky county clerk says she traveled to Washington, D.C., where she and her husband Joe met the pope Sept. 24 at the Vatican Embassy. 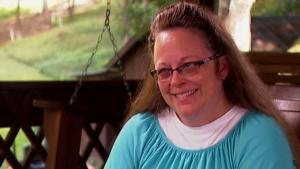 “I put my hand out and he reached and he grabbed it, and I hugged him and he hugged me,” Davis said. “And he said, ‘thank you for your courage.’”

Father Benedettini from the Vatican Press office released a statement after reports emerged that Davis and the pope had met.

“The Holy See is aware of the reports of Kim Davis meeting with the Holy Father. The Vatican does not confirm the meeting, nor does it deny the meeting. There will be no further information given,“ the statement reads. 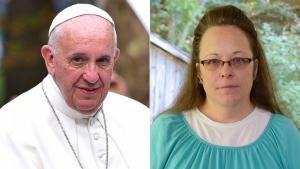 Hours later, Father Benedettini said, in another statement, “I do not deny that the meeting took place, but I will not comment on it further.”

The Apostolic Nunciature in Washington, D.C. would also not elaborate, echoing the Vatican’s latest statement.

Davis, back at work, is still not issuing any marriage licenses. 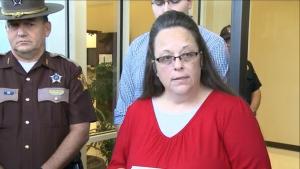 ABC News’ Terry Moran asked Francis Sunday night if he supports individuals, including government officials, who claim religious liberty as a reason to disobey the law.

Davis says Pope Francis left her and her husband with a rosary.

“He told me before he left, he said, ‘stay strong.’ That was a great encouragement. Just knowing that the pope is on track with what we’re doing, it kind of validates everything to have someone of that stature,” Davis said.

Davis says she’s committed to her cause, even if it means more time behind bars.

“I’ve weighed the cost and I’m prepared to do whatever it takes, even jail,” she said. “It’s still the same battle, we just have some more fighting with us now.”