Pontius Pilate Coin Find on the Shroud of Turin? 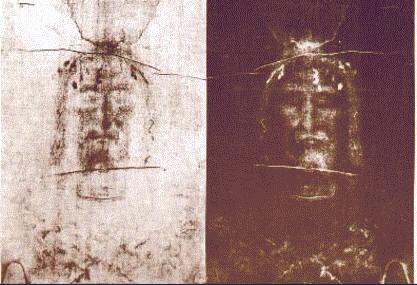 “Researchers Dr Robert Bucklin and Professor Alan Whanger, have pointed out that there are round coin like objects placed over the corner of the eyes of the man on the Shroud. The coin upon the left eye is clearly visible and when the image of the Shroud is enlarged, the image reveals that one of the coins is in fact what is known as a Pontius Pilate Lepton”.

Simon Peter Sutherland has written, regarding the scientifically challenging Shroud of Turin (https://simonpetersutherland.com/2012/04/24/pontius-pilate-coin-found-on-the-shroud-of-turin/):

Whatever one might think concerning the Shroud of Turin, few can deny that it is one of the most fascinating and controversial relics in Christianity.

Its origin and authenticity has been a topic of debate for centuries. We even find John Calvin debating the Shroud of Turin in the 16th century.

Today however, it is a very common to dismiss the Shroud of Turin as a proven fake, since many say that Carbon Dating has proven the Shroud cannot be the burial cloth of Christ? The problem is however, that the Carbon dating is simply not consistent with what we know about the Shroud. The carbon dating simply contradicts the overwhelming evidence found upon the Shroud which dates the cloth to 1st century Israel.

The problem is that there are many finds upon the Shroud of Turin which clearly date or link the burial cloth to 1st century Israel and Jerusalem combined.

These finds include Pollen and dirt from Jerusalem, Roman Flagrum and Crucifixion wounds upon the body, burial consistency with Jewish custom, fibers, blood, 1st century stitching etc which experts have all found upon the Shroud of Turin.

Researchers Dr Robert Bucklin and Professor Alan Whanger, have pointed out that there are round coin like objects placed over the corner of the eyes of the man on the Shroud. The coin upon the left eye is clearly visible and when the image of the Shroud is enlarged, the image reveals that one of the coins is in fact what is known as a Pontius Pilate Lepton.

These coins are only small and are almost 2000 years old and the coin seen on the left eye of the man were minted in Jerusalem in AD 30 by Pontius Pilate. These coins also confirm Pilate as Prefect, and this complies with the Biblical account that Jesus was condemned under Pontius Pilate.

It is also worth noting that it is said that it was a Jewish custom to place small coins over the eyes of a dead body to keep the eyelids closed.

The coins found on the Shroud are consistent with the coins produced by Pilate in AD 30.

… A misspelling on a rare Pontius Pilate coin helped convince researchers that human imprints on the Shroud of Turin, believed to be the burial cloth of Jesus Christ, are genuine and date back to the first century.

Magnifications of the rare coin — believed widely used around Palestine until 70 A.D. to cover the eyes of the dead — showed the same misspelling found in the shroud imprint, a Loyola University theologian said Tuesday.

The Rev. Francis L. Filas said the matching misspellings prove the shroud originated around the same time and place Christ was crucified during Pilate’s reign.

The shroud believed to be Christ’s burial cloth has been preserved since 1578 in the cathedral of Turin, Italy.

Photogra[p]hic plates made in 1898 indicated a human body of a crucified man was imprinted on the shroud. The shroud’s authenticity, however, has been a matter of controversy because researchers had been unable to trace its history further than the mid-14th century.

Filas said his discovery is the strongest evidence yet the shroud is authentic.

‘Imprints of a misspelled Pontius Pilate coin now in existence are the same as imprints of an apparent coin on the right eye of the crucified man’s figure on the Shroud of Turin,’ said Filas, a professor of theology at Loyola.

‘This discovery proves the authenticity, the place of origin, and the approximate dating of the Shroud of Turin beyond reasonable doubt.’

Initially it had been believed the imprints on the shroud had been painted.

‘Now the coin provides concrete proof that the misspelling did exist in the past as it exists today,’ Filas said.

‘What makes the discovery so definitive is the fact that a maverick and extremely rare misspelling from the Greek words for ‘Tiberius Caesar’ occurs on both the Shroud pattern and on the coin. Up to now, the ‘u cai’ could only be theorized as a misspelling of a ‘c’ for a ‘k’ in ‘Tiberiou Kaisaros.’

The coin, Filas said, also provided the earliest and most accurate dating of the shroud.

‘Pontius Pilate issued coins of this type no earlier than 29 A.D. and perhaps through 32 A.D. at the latest,’ Filas said.

‘It completely excludes the possibility of any forgery of the shroud imprints … No one can reasonably deny that this coin originated in Palestine. This confirms more than ever that the man of the shroud was a crucified Jew.’