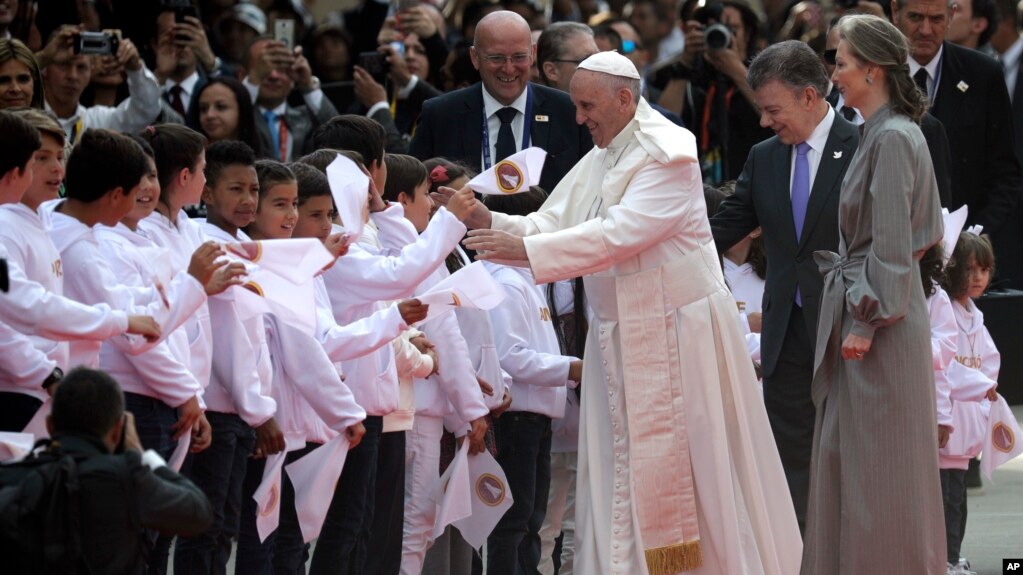 Villavicencio, Colombia (CNN)Amid lush greenery and tropical humidity, Pope Francis touched down in Villavicencio on Friday, bringing his message of peace to one of the most notorious sites of guerrilla warfare in Colombia for the past 50 years.

Here, in one of the last major cities before the vast expanse of the Amazon, the Pope listened to powerful testimonies from ex-guerrilla fighters and from victims of their violence, such as Pastora Mira Garcia, who lost her father, husband and two children during the civil war.
“Do not be afraid of asking for forgiveness and offering it,” the Pope told them. “It is time to defuse hatred, to renounce vengeance.”
It is a message the Pope has echoed throughout this five-day visit in the country, aiming to help Colombians, many of whose memories are still fresh with crimes committed against them, embrace the historic peace agreement reached in December 2016.

There are signs that Francis’ words may be having an effect.
In an open letter to the Pope published on Friday, Rodrigo Londono, former leader of the leftist guerrilla group FARC, asked for forgiveness from Francis for the actions of his group during five decades of war.
“Your repeated expressions about God’s infinite mercy move me to plead your forgiveness for any tears and pain that we have caused the people of Colombia, Londono wrote.
At a Mass on Friday, Pope Francis beatified two Catholic priests who were murdered during the years of the civil war, calling their martyrdom a sign “of a people who wish to rise up out of the swamp of violence and bitterness.”
Bishop Jesus Emilio Jaramillo Monsalve of Arauca was kidnapped and shot twice in the head by Colombian Marxist guerrillas in 1989.
The Rev. Pedro Maria Ramirez Ramos, known asNM! the “martyr of Armero,” was killed at the start of the Colombian civil war in 1948. The conflict claimed an estimated 220,000 lives.

On Thursday, in an unscheduled private meeting, Pope Francis briefly spoke with bishops who had come from Venezuela.
Cardinal Jorge Urosa Savino, archbishop of Caracas, told reporters in Bogota that the bishops had come to ask the Pope for help for the “desperate situation,” in their country.
“There are people who eat garbage,” Urosa said, “yes, the garbage, and there are people who die because there is no medicine.”
“So we want to remind the Pope of this again and especially the serious political situation, because the government is doing everything possible to establish a state system, totalitarian and Marxist.”

Francis continues his visit in Medellin on Saturday and Cartagena on Sunday, before returning to the Vatican later that evening.