Pope warns world is one step away from nuclear war 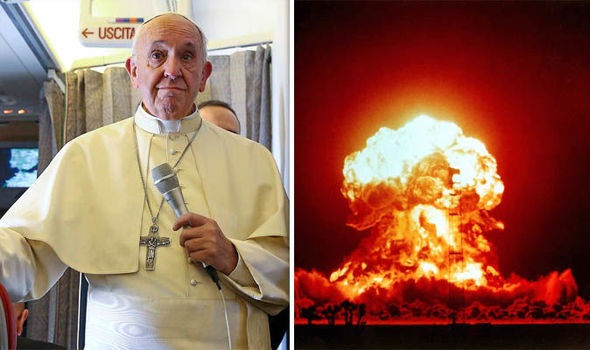 ABOARD THE PAPAL PLANE (Reuters) – Pope Francis said on Monday he was really afraid about the danger of nuclear war and that the world now stood at “the very limit”.

Pope Francis speaks to reporters onboard the plane for his trip to Chile and Peru January 15, 2018.

His comment, made as he flew off for a visit to Chile and Peru, came after Hawaii issued a false missile alert that provoked panic in the U.S. state and highlighted the risk of possible unintended nuclear war with North Korea.

Asked if he was worried about the possib

ility of nuclear war, Pope Francis said: “I think we are at the very limit. I am really afraid of this. One accident is enough to precipitate things.”

He did not mention Hawaii or North Korea.

Pope Francis has often flagged the danger of nuclear warfare and in November he appeared to harden the Catholic Church’s teaching against nuclear weapons, saying countries should not stockpile them even for the purpose of deterrence.

As reporters boarded his plane bound for Chile, Vatican officials handed out a photograph taken in 1945 that shows a young Japanese boy carrying his dead brother on his shoulders following the U.S. nuclear attack on Nagasaki.

“I was moved when I saw this. The only thing I could think of adding were the words ‘the fruit of war’,” Francis said, referring to a caption put on the back of the image.

“I wanted to have it reprinted and distributed because an image like this can be more moving than a thousand words. That is why I wanted to share it with you,” he said.