JEDP based on a flawed Hegelian philosophy 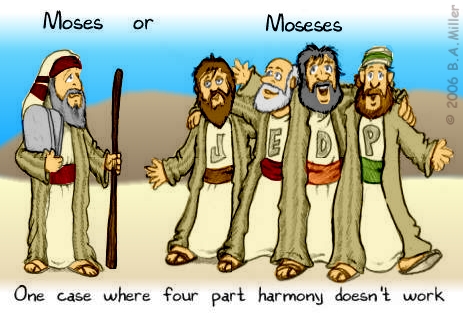 JEDP based on a flawed Hegelian philosophy

“The entire JEDP edifice rests on a philosophical pillar of anti-supernaturalism”.

The following refutation of the JEDP theory, of which I give only the beginning and the conclusion, has been taken from a traditional Catholic site, Unam Sanctam Catholicam: http://unamsanctamcatholicam.com/history/historical-apologetics/79-history/472-deconstructing-documentary-hypothesis.html

The full article is worth reading.

For a P. J. Wiseman-based refutation of JEDP, see my:

Structure of the Book of Genesis

The Doctrines of the Documentarians

The teachings of the Documentarians – those who advocate the Documentary Hypothesis – can be divided into one major doctrine and several minor doctrines which are inferred from the major.

The major doctrine of the Documentarians, the crux of the whole theory, is the assertion that the first five books of the Bible (Pentateuch) were not written until over a thousand years after Moses’ death and were the result of a process of writing, rewriting, editing, and compiling by various editors and redactors. The final book we know as the “Old Testament” is actually a compilation of four distinct works or “traditions”: the Yahwist, Elohist, Deuteronomist, and the Priestly (JEDP). This also represents the order of compilation – the J and E documents were written first, followed by the D and finally P. According to the most prevalent form of the Documentary Hypothesis, J was compiled around 950 BC, E around 850, D around 620, and P around 450 BC. This means that no part of the Pentateuch can be dated from prior to the Divided Monarchy, and most of it does not predate the Prophets. The main criterion for this theory is a laborious scrutiny of the text itself, through which it is asserted that the four documents can be isolated. The evolutionary development of the JEDP documents is the heart of the theory.

This gives rise to several subsidiary theories, all implied by the JEDP hypothesis. The minor doctrines asserted by the Documentarians are:

We will examine each of these items in length later on when we look at the philosophical and historical assumptions of the Documentarians. For now it is sufficient to list these minor doctrines and note that they all contain an anti-supernatual bias. The entire JEDP edifice rests on a philosophical pillar of anti-supernaturalism. For this reason, the Documentary Hypothesis is incompatible with traditional Catholicism; in fact, it is a form of Modernism, insofar as it places the center of Old Testament religion not on the objective acts of God in Israel’s history, but on Israel’s understanding of itself or its subjective religious perception, a form of vital immanence.

The Documentary Hypothesis, which posits a very late date of composition for the Pentateuch from four or more different sources, has its origins not in sound biblical exegesis but in a flawed philosophy of history based on the ideas of Hegel. Arising as it did in the late 1800’s prior to the golden age of archaeology, its myopic focus on literary form criticism is methodologically flawed. It also fails historically, as there is no credible historical reason to suppose late composition dates for Deuteronomy, Leviticus and Numbers.

Everything about the alleged D and P sources can be easily situated in the context of the 15th century B.C. As archaeological research moves forward, everything we uncover continues to prove what a complex and cultured society Moses and the Israelites of the Exodus existed in. Thus the Documentary Hypothesis, with its faith-destroying J,E,D,P theory, need not be taken seriously by Catholics. It fails both methodologically, historically and theologically, as its presuppositions inevitably lead to heresy. Catholic exegetes and scholars who use this bankrupt, dated theory ought to abandon it and return to the traditional teaching of the unified, integral nature of the Pentateuch and its authorship in the 15th-13th century B.C.