Pope Francis: A Christian cannot be an anti-Semite 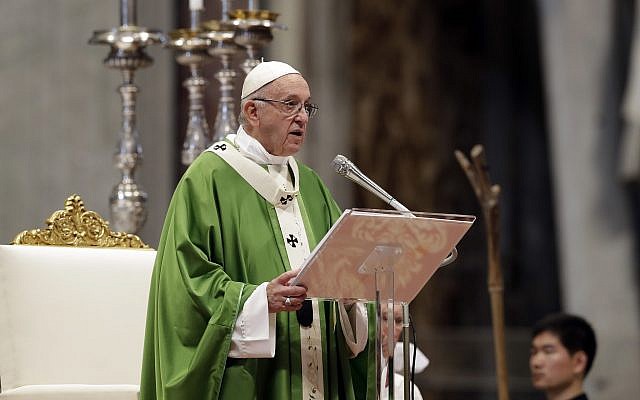 Pope Francis delivers his speech during a Mass for the closing of the synod of bishops in St. Peter’s Basilica  at the Vatican, Oct. 28, 2018. (AP Photo/Andrew Medichini)

Pope Francis lamented anti-Semitic attacks and remarked that “a Christian cannot be an anti-Semite” during an audience with Jewish emissaries on Monday.

The pope received four first time delegates of the World Congress of Mountain Jews at the Vatican.

Two weeks after the attack on a Pittsburgh synagogue that killed 11 worshipers Francis said in a statement: “Sadly, anti-Semitic attitudes are also present in our own times,” during his meeting with the emissaries of the Mountain Jews, the descendants of Jews who left ancient Persia and settled in the Caucasus.

“A Christian cannot be an anti-Semite; we share the same roots. It would be a contradiction of faith and life. Rather, we are called to commit ourselves to ensure anti-Semitism is banned from the human community,” he said.

The day after the Pittsburgh attack, the head of the Catholic Church said in his weekly prayers that “all of us are wounded by this inhuman act of violence.”

The Argentinian-born pope, who formerly was named Jorge Bergoglio and who was the former archbishop of Buenos Aires, was close to the victims of the terrorist attack on a Jewish target in his hometown.

Francis also told the Mountain Jews: “I have always sought to emphasize the importance of friendship between Jews and Catholics. It is based on a fraternity grounded in the history of salvation and it finds concrete expression in concern for one another. Together with you, I would like to offer thanks to the Giver of every gift for the blessing of our friendship, which is a reason and an impetus to mutual dialogue.”

He closed his remarks with “Shalom aleichem!”