Fiery Judgment in the Valley of Jehoshaphat 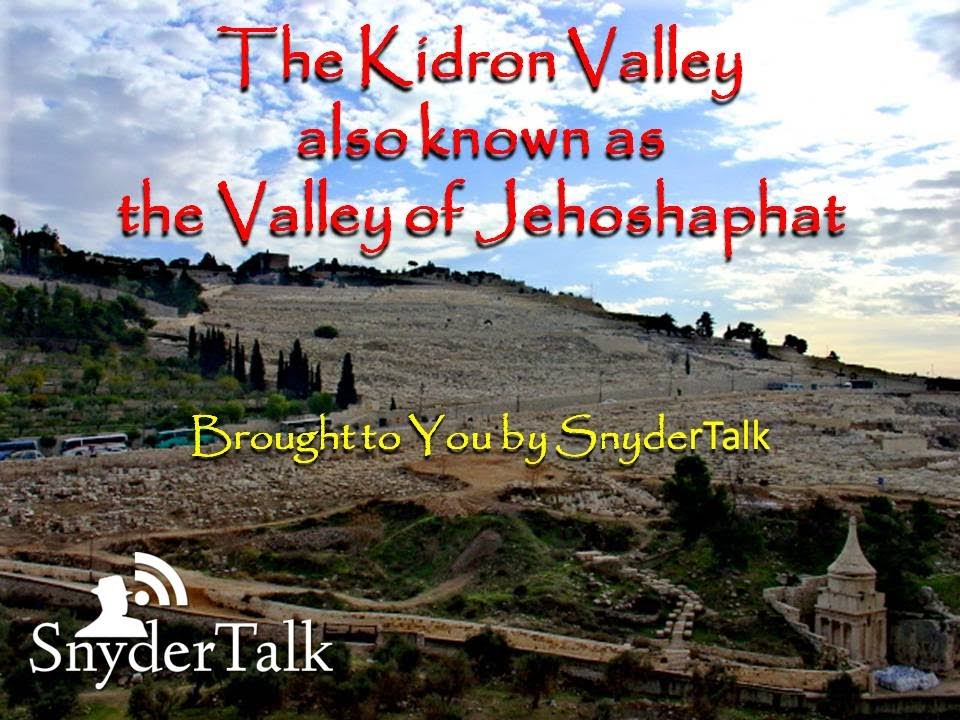 “In Joel 3: 11-17, details of a major conflict in the Valley of Jehoshaphat are given.

This account runs parallel to that battle of Armageddon recorded in Revelation 16:14-18”.

That the Kidron Valley to the east of Jerusalem is the same as the Valley of Jehoshaphat is apparent from this statement by Dr. Ernest L. Martin, in his article “Updated Information
on the Crucifixion of Jesus” (1992): http://www.askelm.com/doctrine/d920401.htm

There are numerous historical reasons for selecting Olivet as the place of Jesus’ crucifixion. In the recently translated Temple Scroll, Yadin pointed out that all people bearing religious defilements which prevented them from entering the holy city or the Temple were directed to stay east of the ideal Sanctuary region mentioned in the scroll (Yadin 177). Evil and defiled people (sinners) were kept east of Jerusalem in order to prevent any “winds of evil” from flowing over the holy city from the west. This is one of the reasons the sin offering of the Red Heifer and those of the Day of Atonement (which were to atone for sins) were burnt to ashes in this eastern area “outside the camp” (Leviticus 4:21; 16:27). Yadin suggested that a part of this eastern region which had been put aside for defiled persons was even referred to in the New Testament (e.g. Mark 14:3).

Since all sin offerings were sacrificed (or “executed”) east of the Holy Place of the Temple, and the most important ones were sacrificed further east at the Red Heifer altar on Olivet, this easterly region of the Temple became known as the place where God dealt with sin — where all the sins of the world will be judged. This is one reason why the Kidron Valley separating the Temple from the Mount of Olives became known as the Valley of Jehoshaphat (the valley where “God judges”). Even to this day Jews, Muslims and Christians consider the summit and western slope of Olivet as the ordained place where God will judge all people in the world for their sins. Charles Warren in Hasting’s Dictionary of the Bible listed over fourteen [Christian] … authorities (from the deaux Pilgrim onward) who attested to this belief (II.562). This is why it was important, from the Christian point of view, that Jesus died in this eastern region which was reckoned the judgment place for all mankind. For Jesus to be judged as dying for the sins of all mankind, Christians thought he had to be judged in the place where all mankind were designed to be judged for their sins.

Even Muslims (who inherited many traditional beliefs from the Jews and Christians) firmly believe that the summit and the western slope of the Mount of Olives is the judgment area for mankind. The Encyclopaedia Judaica has an interesting excerpt about this. “All the dead will congregate on the Mount of Olives and the angel Gabriel will move paradise to the right of Allah’s Throne and hell to its left. All mankind will cross a long bridge suspended from the Mount of Olives to the Temple Mount, which will be narrower than a hair, sharper than a sword, and darker than night. Along this bridge there will be seven arches and at each arch man will be asked to account for his actions” (IX col.1576). This is the Muslim account.

It is easy to see that this traditional Muslim belief is based on the geography of the Temple and the Red Heifer arched bridge over the Kidron Valley that existed in Jesus’ time. Indeed, the Hebrew word for the altar where the Red Heifer was burnt to ashes is miphkad (see Ezekiel 43:21)…..

Armageddon, or “Hill of Megiddo”, does not refer to the famous site of Megiddo about 90 km north of Jerusalem. For one thing: https://en.wikipedia.org/wiki/Armageddon

“Mount” Tel Megiddo is not actually a mountain, but a tell (a hill created by many generations of people living and rebuilding on the same spot)[4] on which ancient forts were built to guard the Via Maris, an ancient trade route linking Egypt with the northern empires of Syria, Anatolia and Mesopotamia.

Joel links Armageddon with the Valley of Jehoshaphat (or Kidron):

The reference to Armageddon in Rev 16:16, “And he gathered them together into a place called in the Hebrew tongue Armageddon” is very closely linked to Joel 3:14, “Multitudes, multitudes in the valley of decision (or threshing).”This link can be related to the battle that will take place when Yahshua returns to set up God’s kingdom on earth. The connection is established by the meaning of the word Armageddon, which as already shown signifies, “a heap of sheaves in a valley for judgement.”

Titus now decided upon a show of strength, and staged an army parade, which lasted for four days. Meanwhile, his adviser Flavius Josephus was to talk to the men on the walls, trying to induce them to surrender. The Jewish leaders were not impressed by the arguments of the turncoat, and on the fifth day, the Roman soldiers renewed the struggle: they started to build four large siege dams, aimed at the Antonia fortress. (It was to be taken by force, because it had large stores and two great cisterns.) The Roman attack was no success: John’s sappers undermined one of the dams and managed to raise a fire on a second one, and Simon’s soldiers destroyed the remaining dams two days later.

The Roman commanders now knew that their enemies would fight for every inch of their city, and understood that the siege of Jerusalem would take a long time. Therefore, Titus changed his plans. There were signs that the supplies of Jerusalem were giving out: some Jews had left the city, hoping to find food in the valleys in front of the walls. Many of them had been caught and crucified – some five hundred every day. (The soldiers had amused themselves by nailing their victims in different postures.) The Romans decided to starve the enemies into surrender. In three days, Jerusalem was surrounded with an eight kilometer long palisade. All trees within fifteen kilometres of the city were cut down. The camps of the legions V Macedonica, XII Fulminata and XV Apollinaris were demolished; these troops were billeted on Bezetha.

The death rate among the besieged increased. Soon, the Kidron valley and the Valley of Hinnom were filled with corpses. One defector told Titus that their number was estimated at 115,880. Desperate people tried to leave Jerusalem. When they had succeeded in passing their own lines and had not been killed by Roman patrols, they reached the palisade. Here they surrendered: as prisoners, they were at last entitled to some bread. Some of them ate so much, that they could not stomach it and died. In that case, their oedemaous bodies were cut open by the Syrian and Arab warders, who knew that some of these people had swallowed coins before they started their ill fated expedition. Titus refrained from punishing these violators when he discovered that there were too many. One of the defectors was the famous teacher Yohanan ben Zakkai, who escaped in a coffin and saved his life by predicting Titus that he, too, would be an emperor. ….