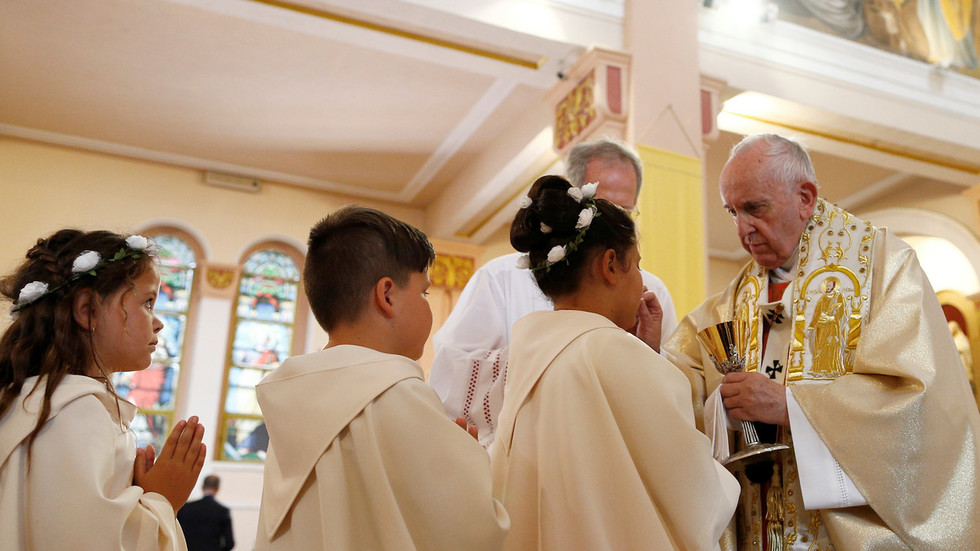 Bulgarian Catholic children receive their First Communion given by Pope Francis during the Holy Mass at Most Holy Heart of Jesus church in Rakovski, Bulgaria May 6, 2019. © REUTERS/Yara Nardi
As the issues of legality and morality of abortions consume the national debate in the US, Pope Francis has thrown his weight behind the pro-life side of the argument, comparing the procedure to hiring an assassin.
The pontiff, who is known for his outspoken aversion to the practice, tore into the proponents of abortion as an inalienable human right. Speaking at an anti-abortion conference in Vatican on Saturday, he argued that there is no excuse for taking away a human’s life – even in cases when the fetus has a debilitating medical condition and the newborn might die at birth or shortly after.

Francis asked, stressing that a sick fetus should be provided with all possible care, as should the parents, who need to be prepared to cope with their loss.

“Taking care of these children helps parents to grieve and not only think of it as a loss, but as a step on a path taken together.”
Francis, as the head of the Roman Catholic Church, has not shunned away from controversial comparisons before. Last October, he spoke along the same lines, equating abortion with “resorting to a contract killer to solve a problem.” Before that, he compared the practice with a version of the Nazi eugenics program.
While the Vatican’s rhetoric might sound extreme to pro-choice activists who fight against blanket bans on abortions, Francis has reaffirmed the Catholic Church’s centuries-old opposition to the practice, which it considers a mortal sin.
READ MORE: ‘Strongly pro-life’ but supports exceptions: Trump weighs in on raging abortion law battle
The strong-worded remark from Francis comes at a time the issue is grabbing the headlines in US media after half a dozen states passed restrictive anti-abortion bills or are prepare to do so
The strictest abortion bill in the nation was signed into law by Alabama governor Kay Ivey last week. It makes the procedure a class-A felony, outlawing all abortions, including in the case of incest and rape, but makes an exception if the mother’s life is at stake. Doctors who violate the ban face 10 to 99 years in prison. The bill sparked an outcry and mass protests led by pro-choice activists, and the American Civil Liberties Union (ACLU) and Planned Parenthood on Friday filed a lawsuit to challenge it.
Earlier this month Ohio, Georgia and Mississippi passed “fetal heartbeat” laws, which prohibit abortions after six weeks of pregnancy, around the time when a fetus’ heartbeat can be detected. Only the Georgia law included exemptions for rape and incest. The bills, while applauded by pro-life activists, have spawned numerous legal challenges and are likely to be contested. On Friday, a federal judge in Mississippi blocked the respective anti-abortion law, granting preliminary injunction after hearing the argument from the Center for Reproductive Rights.
Missouri has become the latest state to pass a bill outlawing abortions after eight weeks and envisioning 15-year prison terms for doctors who perform them.

Louisiana lawmakers are scheduled to vote on the state’s own heartbeat abortion ban on Tuesday.