Pope Francis: Free women from the slavery of prostitution 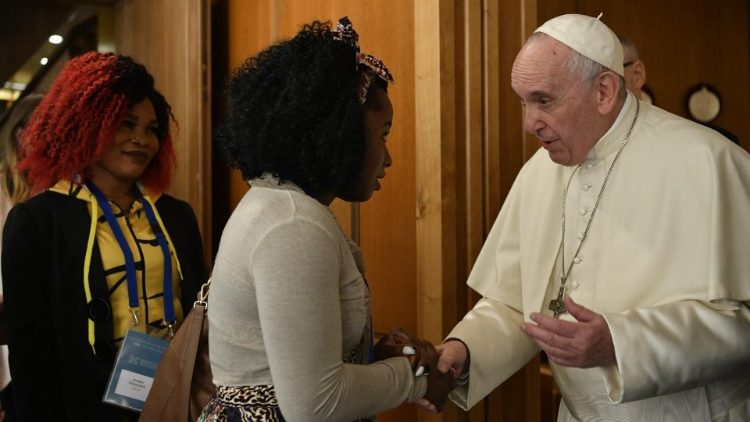 
The original title of the book in Italian is “Donne crocifisse. La vergogna della tratta raccontata dalla strada”, by Fr Aldo Buonaiuto, a priest of the Pope John XXIII Community.

In the preface, Pope Francis recalls one of his Mercy Friday visits to a house run by the Pope John XXIII Community for victims of human trafficking. “I did not think I would find such humiliated, afflicted and suffering women there”, writes the Pope. “Truly, women crucified”.
Pope Francis describes listening to “the moving and very human stories of these unfortunate women, some of them with their child in their arms”. Afterwards, he says he felt the need to “ask forgiveness for the real tortures they had to endure because of their clients, many of whom call themselves Christian”.

“A person can never be offered for sale”, writes the Pope. He goes on to praise what he calls “the precious and courageous work of rescue and rehabilitation” conducted by the author, Fr Aldo Buonaiuto, over the years.
The Pope also expresses his awareness of the dangers this work involves, including possible retaliations by crime syndicates for which these women represent “an inexhaustible source of illegal and shameful profit”.
Pope Francis says he hopes this book will be widely read. If we are to “combat the exploitation and humiliation of human lives effectively”, writes the Pope, we need to tell “the stories behind the shocking numbers” of people trafficked.

“Corruption is a disease that does not stop on its own”, he continues. “We need to raise awareness individually and collectively”, in the Church as well.
Pope Francis goes on to affirm that: “any form of prostitution is a reduction into slavery, a criminal act, a disgusting vice that confuses love-making with venting one’s instincts by torturing a defenceless woman”.
Prostitution, writes Pope Francis, is “a wound to the collective consciousness”. He describes as “pathological” the idea that a woman can be exploited like a commodity to be used and thrown away. Prostitution is “a disease of humanity”, he adds, “a wrong way of thinking about society”. Freeing these slaves, says Pope Francis, “is a gesture of mercy, a duty for all people of good will”.
“Individuals and institutions cannot remain indifferent before their cry of pain”, concludes the Pope. “No one should turn away or wash their hands of the innocent blood that is shed on the roads of the world”.