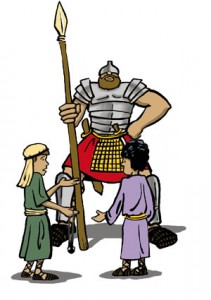 “And there was again war with the Philistines at Gob, and Elhanan

the son of Jaare-oregim, the Bethlehemite, struck down Goliath the Gittite,

the shaft of whose spear was like a weaver’s beam”.

Did Goliath have two heads?

It is not entirely uncommon for Australian mainlanders to ask Tasmanians (such as I): “Where’s your other head?”

The more northerly Australians can have a similar disregard for South Australians, who are, they say, “sure proof that Tasmanians can swim”.

So, might the biblical giant, Goliath, have been polycephalic?

We know that at least one of his massive heads was removed by the young shepherd boy, David (I Samuel 17:51): “Then David ran over and pulled Goliath’s sword from its sheath. David used it to kill him and cut off his head”.

But it seems that, in true Tasmanian folkloric fashion, Goliath appears (from 2 Samuel 21:19) to have grown another head, this one being removed by Elhanan.

Or is this simply a case of a biblical repetition, due to the insertion of a different source using another name for David the Bethlehemite: namely, Elhanan?

The matter is well resolved at:

Who killed Goliath, David or Elhanan?

David did (1 Samuel 17:50) – “Thus David prevailed over the Philistine with a sling and a stone, and he struck the Philistine and killed him; but there was no sword in David’s hand.”

Elhanan did (2 Sam. 21:19)- “And there was war with the Philistines again at Gob, and Elhanan the son of Jaare-oregim the Bethlehemite killed Goliath the Gittite, the shaft of whose spear was like a weaver’s beam.”

The answer lies in two areas. 1 Chronicles 20:5 says, “And there was war with the Philistines again, and Elhanan the son of Jair killed Lahmi the brother of Goliath the Gittite, the shaft of whose spear was like a weaver’s beam.” This is the correct answer; namely, that Elhanan killed Goliath’s brother.

Second, it appears there was a copyist error in 2 Samuel 21:19. According to Gleason Archer’s Encyclopedia of Bible Difficulties on page 179, it says,

Therefore, we see that 2 Samuel 21:19 had a copyist error and 1 Chronicles 20:5 is the correct information.