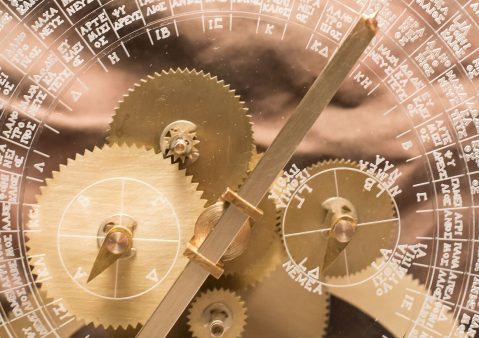 Gavin Menzies (in The Lost Empire of Atlantis) claims that the “Minoans” certainly did, travelling, as he tells us, as far as mineral rich Lake Superior.

I (Damien Mackey) think that the:

So-called “Minoans” were the Philistines

Gavin Menzies also discusses the amazing Antikythera device as evidence that the ancients had sophisticated astronomical and navigational knowledge.

Cretan Greek researcher Minas Tsikritsis “maintains that an object from the Minoan Age discovered in 1898 in the Paleokastro site on Crete, was in fact “a cast for building a mechanism that functioned as an analog computer to calculate solar and lunar eclipses”.”:

Minas Tsikritsis, a native of Crete, is a Professor of Computer Science and noted Researcher of Aegean Scripts. Included in his work is his claim to have deciphered Linear A and the Phaistos Disk, one side of which appears to be a form of sea shanty.

Gavin Menzies quotes[780.319] Tsikritsis’ belief that the Minoans had mathematical knowledge equal, if not superior, to that of the Babylonians and Egyptians.

However, this claim has been seriously challenged by a recent study of a 3,700-year-old Babylonian tablet known as Plimpton 322. The tablet was discovered around a century ago in what is now southern Iraq. Australian scientists from the University of New South Wales, Sydney have now demonstrated that the tablet is the world’s oldest and most accurate trigonometric table, predating the Greek astronomer Hipparchus by over a millennium(b). These claims have generated some considerable debate (c).

Additionally, based on an analysis of Plutarch’s “On the Apparent Face in the Orb of the Moon,” Tsikritsis believes that the Greeks had contact with North America, at least as far back as 86 AD!(a) *Some time later he expanded on the idea in a paper published on the Researchgate website(d).*

The Antikythera Mechanism is one of the most remarkable artefacts ever discovered. It was found by sponge divers off the coast of the Aegean island of Antikythera just over a century ago. The device consists of four fragments with a total of 30 bronze gears.

Very little intensive investigation was done until the early 1950’s when Derek J. de Solla Price (1922-1983) a professor at Yale University undertook a study of the Mechanism. His conclusions were published in a number of papers including Gears from the Greeks, now available as a pdf file(r).

It was originally dated to the 1st century BC and had been ascribed by some to the Greek astronomer Hipparchos, but recent research by Professor Alexander Jones of New York’s Institute for the Study of the Ancient World has pushed this back to the 2nd century BC(b).

Jones dismissed as ‘desperate’ a suggestion by Dr. Jo Marchant, that the mechanism had been part of a timepiece that possibly controlled the sequential appearance of figures to indicate seasons. Marchant is the author of Decoding the Heavens: Solving the Mystery of the World’s First Computer[1460].

A report(n) published in November 2014 revised further the date of its creation back to 205 BC. This modification includes the suggestion that the mathematics upon which the Mechanism were based were Babylonian rather than Greek. The level of ancient Greek celestial knowledge is also being reappraised in the light of a recent study of a decorated cup of a type known as a skyphos(o).

The superiority of Babylonian mathematics was supported by a recent study of a 3,700-year-old tablet known as Plimpton 322. The tablet was discovered around a century ago in what is now southern Iraq. Australian scientists from the University of New South Wales, Sydney have now demonstrated that the tablet is the world’s oldest and most accurate trigonometric table, predating the Greek astronomer Hipparchos by over a millennium(z).

The Mechanism is apparently a clockwork device for calculating astronomical events. A number of models have been built(c), based on the evidence of the fragments discovered and further study is continuing. Even Lego was used by designer Andrew Carol to build a replica of the mechanism(e)(d). Furthermore, in November 2011 Hublot, the Swiss watch manufacturer, revealed(h)  that they had designed a wristwatch based on the Antikythera Mechanism.

In 2008, it was announced that writing engraved on the housing indicated the locations of athletic games; “The Games dial shows six competitions, four Panhellenic (Olympics, Pythian, Isthmian, and Nemean) plus Naa (Dodona) and very probably Halieia (Rhodes)

At same time, a possible connection with the renowned Archimedes was being posited by some commentators(f). An even more remarkable feature was the clever use of two gears, one positioned slightly off-centre in relation to the other, allowing the mechanism to track the apparent speeding up and slowing down of the moon each month, resulting from its elliptical rather than circular orbit(g).

The question that has now arisen is whether “It is possible that the mechanism is based on heliocentric principles, rather than the then-dominant geocentric view espoused by Aristotle and others.”(ab)

Dr. Minas Tsikritsis, a Cretan researcher, maintains that an object from the Minoan Age discovered in 1898 in the Paleokastro site on Crete, was in fact “a cast for building a mechanism that functioned as an analog computer to calculate solar and lunar eclipses.”(i) This was nearly a millennium and a half before the Antikythera Mechanism was manufactured, which would make it Minoan.

Commentators such as David Hatcher Childress see the Antikythera device as just another piece of evidence of more complex scientific knowledge among early cultures than is usually accepted and that by extension the possibility of a technologically advanced Atlantis[620].

In his 2014 book, The Stonhenge Codes[977], Professor David P.Gregg, has devoted an appendix to the sophistication of the mechanism, in which he discusses the functions of individual shafts and gears. His objective is to show that its complexity is comparable to that of Stonehenge and that our view of early Greek mathematics and astronomy requires revision. His book can be read online(j).

*A January 2019 article elaborates further on the Mechanism’s function as a predictor of possible eclipses(ae). It may be worth recalling that in the 1960’s, Gerald Hawkins suggested that the 56 Aubrey Holes at Stonehenge were also eclipse predictors[1613], an idea endorsed by Fred Hoyle[1614].(af)*

Opus Gemini, a trilogy of novels by Andreas Möhn, based on the Antikythera Mechanism was published on Kindle format in September 2013 and is also available in other formats. Further information and updates are available on his website(m).

The following website(a), will keep you up to date on related developments.

New Scientist announced on June 4th 2014(k) that plans have been made to dive again to the Antikythera wreck in the hope of finding a second ‘mechanism’, using a ‘wearable submarine’. The Sept/Oct season of 2014 ended with evidence that the ship had been up to 50 metres long, making it thelargest ancient shipwreck ever discovered(l).

The February 2015 edition of Smithsonian Magazine gives an up-todate review of the scientific studies of the Mechanism(p). In June 2016 the Smithsonian returned to the subject with an article(u) devoted to the extensive writing, some less than a millimetre tall, revealed by CT scans on virtually every surface. This recent study indicates that the Mechanism also appears to have an astrological purpose! These investigations also pointed to the Aegean island of Rhodes as its place of manufacture. ….