The University of Queensland is going to extraordinary lengths to silence its most effective critic, a 20-year-old philosophy student who has campaigned against the university’s tight links with the Chinese Communist Party.

Drew Pavlou came to public attention in July last year when, while leading a protest in support of Hong Kong democracy activists, he was assaulted by men who gave every impression of being heavies working for the Chinese state.

Pavlou’s safety was threatened further when China’s state media vilified him, in effect giving official blessing to patriotic thuggery. He was no longer safe on campus.

How has the university responded to these events, surely one of the most worrying assaults on free speech?

None of the pro-Beijing students or the thugs who assaulted Pavlou has been disciplined. Xu, whom UQ had appointed an adjunct professor, appears to be as welcome as ever at the university.

Instead, irritated by Pavlou’s robust criticism, pranks and sarcasm, UQ seems to have decided to intimidate him into silence.

In February, Pavlou posted a mock Facebook announcement of a forthcoming “UQ Confucius Institute Panel: Why Uyghurs Must Be Exterminated”. A bit of undergraduate humour? Not for the mandarins at UQ.

PLEASE SHARE. It is almost certain there will be an attempt to remove me from the UQ Senate on May 13th. I was elected by a majority of students on a platform supporting Hong Kong and opposing the Confucius Institute. If I am removed, it will be in favor of a pro-CCP candidate. 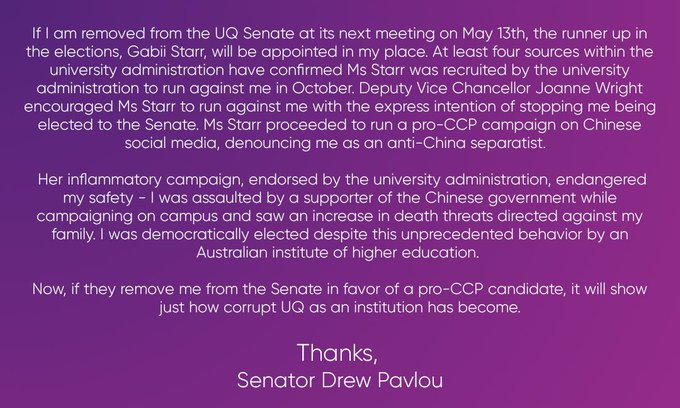 University lawyers Clayton Utz wrote a letter to Pavlou that itself reads like a prank. It accused him of “making false statements” because, in fact, the Confucius Institute has no involvement with “the alleged event”. There follows a page and a half listing the rules and by-laws it claims he has viol­ated, and ends menacingly: if he fails to remove the post and will not agree to refrain from making “false and misleading” statements, then the university “reserves the right to commence proceedings”.

Pavlou complied with the first demand. But then UQ sought the nuclear option. On April 9, the disciplinary board delivered a 186-page document detailing 11 charges. Pavlou has been summoned to a secret meeting at which, if he cannot explain himself, he can expect to be expelled.

Most of the allegations are trivial to the point of risible. UQ somehow manages to construe jokes, obvious hoaxes and social media badinage as forms of harassment and bullying or acts that prejudice its reputation. It’s true Pavlou’s activism is often provocative and his criticisms sharp, at times over the top, but whatever case the disciplinary board might have had is vitiated by the series of frivolous allegations against him, the effect of which is to indicate the board itself is engaged in harassment and bullying.

The first allegation is that he used a rude word on Facebook (closely monitored by the university) to describe students enrolled in the bachelor of advanced finance and economics. The university claims this constitutes “discriminatory, harassing or bullying behaviour … towards these students”.

It is laughable. Can they produce one student among several hundred aspiring corporate executives who read Pavlou’s Facebook page and felt discriminated against, harassed or bullied? If they could, would anyone take them seriously?

I won’t let UQ silence me. As an Australian, I will always stand with Hong Kong. 光復香港，時代革命! #FreeHongKong 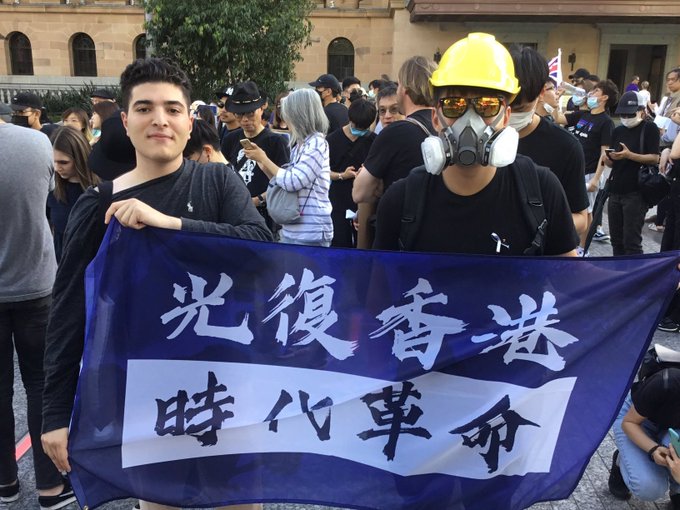 Pavlou deleted his mock “Why Uyghurs Must Be Exterminated” announcement but the university won’t let it go. It claims “a member of the public” (either a fool or a satirist) complained the planned event was “absolutely disgustingly racist and fascist” and they’d be there to protest, and claims Pavlou’s post harmed the university’s reputation by “indicating to the public that UQ supports an ‘extermination’ of the Uyghur people”.

Seriously. One begins to suspect that Pavlou has a secret sympathiser on the board conspiring to make the “allegation notice” so outlandish as to be laughed out of court.

But the next allegation takes a more sinister turn. It’s alleged that Pavlou was guilty of behaviour that “unreasonably disrupted staff or students” when at 12.30pm “on or about 26 February 2020” he took a pen from a shelf at the university stationery shop, wrote something with it, put the pen back and left the shop paying only for three sheets of card.

This kind of surveillance and reporting to authorities has more in common with Beijing’s Orwellian social credit system than what we’d expect on an Australian campus. It’s clear that someone high up at UQ decided, through exasperation or vindictiveness, to “throw the book at Pavlou”.

UQ wants to expel me because I supposedly breached their made-up corporate code of conduct by posting: ”I speak for the university in supporting Hong Kong.” A university is its students, and they democratically elected me in a landslide to speak for them and fight for Hong Kong.

If UQ wants to counter criticism of its China links it has vast resources with which to do so openly, both within the university and more broadly. Instead, it has set up a kangaroo court hoping to browbeat an undergraduate into submission or to expel him.

In the context of UQ’s documented discomfort with Pavlou’s political activism — especially his highlighting of links between the university, its vice-chancellor and various agencies of the Chinese Communist Party — the threat of expulsion can be read only as an attempt to silence legitimate political activism on the campus.

Clive Hamilton is professor of public ethics at Charles Sturt University in Canberra.