In his Pentecost homily, Pope Francis asks Christians to reject narcissism and pessimism 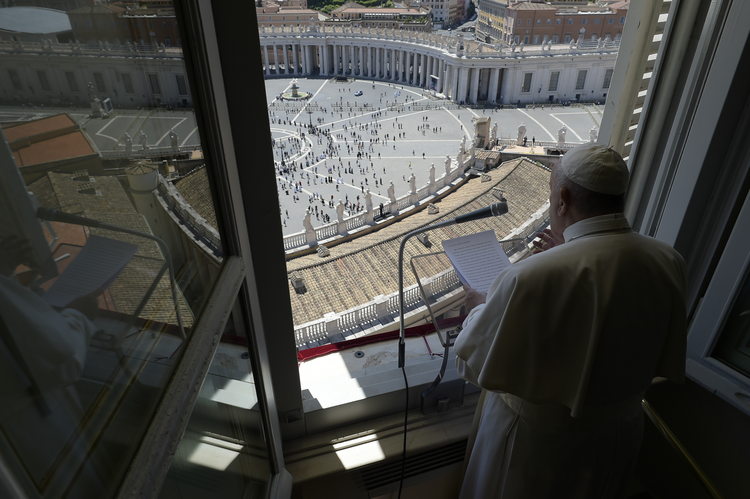 Pope Francis greets the faithful from the window of his studio overlooking St. Peter’s Square on May 31. The pope led the Sunday prayer from his window for the first time in three months, after the square was reopened. (CNS photo/Vatican Media)

“The Spirit, the living memory of the church, reminds us that we are born from a gift and that we grow by giving, not by holding on, but by giving of ourselves,” Pope Francis told Christians worldwide in his homily from St. Peter’s Basilica on Pentecost Sunday.

He alerted believers to “three enemies” that are “always lurking at the door of our hearts” and “prevent us from giving ourselves”: narcissism, victimhood and pessimism. He noted that these enemies are particularly evident during the coronavirus pandemic.

The pope alerted believers to “three enemies” that are “always lurking at the door of our hearts” and “prevent us from giving ourselves”: narcissism, victimhood and pessimism.

Francis explained that “narcissism makes us idolize ourselves, to be concerned only with what is good for us. The narcissist thinks: ‘Life is good if I profit from it’.” He said we see “how wrong” narcissism is during the pandemic, when there is a temptation to “think only of our own needs, to be indifferent to those of others, and not to admit our own frailties and mistakes.”

He also denounced “victimhood,” noting that victims complain, “no one understands me, no one helps me, no one loves me, everyone has it in for me!” and so “the victim’s heart is closed.”He denounced victimhood as particularly “ugly” in the present crisis.

Finally, he denounced “pessimism,” or endlessly complaining that “nothing is going well [in] society, politics, the church.” He said a pessimist “gets angry with the world, sits back and does nothing.” Pessimism is particularly damaging at this time, he said, when the world is making the effort of “beginning anew,” because pessimism is “the tendency to see everything in the worst light and to keep saying that nothing will return as before.”

Pope Francis: “we are experiencing a famine of hope and we need to appreciate the gift of life, the gift that each of us is.”

Francis said, “when someone thinks this way, the one thing that certainly does not return is hope.” He added that now “we are experiencing a famine of hope and we need to appreciate the gift of life, the gift that each of us is.”

Later, speaking from the papal study window in the Apostolic Palace at midday, he greeted hundreds of Romans, wearing masks and respecting social distance in St. Peter’s Square, for the first time since the beginning of March. He drew attention to the plight of the indigenous and other poor and vulnerable people in the Amazonian region who have been badly hit by the pandemic. He prayed for them, as well as for all who have suffered from the health crisis worldwide, and he called for a minute of silent prayer for all who have died and for those who gave their lives helping others infected with the virus.

He also said, “We need the light and the strength of the Holy Spirit today. The church needs it to walk in harmony and to witness courageously to the Gospel. The entire human family needs it so as to come out of the crisis more united, not more divided. You know that from a crisis such as this we do not come out the same as we were before; we come out either better or worse. Let us have the courage to change, to be better, to be better than before and to be able to build positively the post-crisis world.”

Pope Francis wore red vestments for the feast of Pentecost as he celebrated Mass at the altar of the chair of St. Peter, just as he did at Easter. Some 50 women and men, religious and laypeople, wearing masks and respecting social distance attended the celebration, but a global audience of countless millions followed on the internet thanks to Vatican Media.

Francis began his homily by recalling the words of St. Paul in the first letter to the Corinthians that in the church “there are different kinds of spiritual gifts,” but it is “the same God who produces all of them in everyone.” He said St. Paul tells us that “the Holy Spirit is the one who brings together the many; and that the church was born this way: We are all different, yet united by the same Holy Spirit.”

He recalled the origin of the church and the diversity of its first members: “Some were fishermen, simple people accustomed to living by the work of their hands, but there were also others, like Matthew, who was an educated tax collector.” They came from “different backgrounds and social contexts” and in terms of character, “some were meek, and others were excitable; they all had different ideas and sensibilities.” But, he said, “Jesus did not change them; he did not make them into a set of pre-packaged models. He left their differences and now he unites them by anointing them with the Holy Spirit.”

Turning to “the church of today,” Francis asked, “What is it that unites us, what is the basis of our unity?” He noted that “we too have our differences…of opinions, choices, sensibilities” and that “the temptation is always fiercely to defend our ideas, believing them to be good for everybody and agreeing only with those who think as we do.” But, he said, “this is a faith created in our own image; it is not what the Spirit wants.”

He continued, “We might think that what unites us are our beliefs and our morality. But there is much more: our principle of unity is the Holy Spirit.” He said, “The Spirit comes to us, in our differences and difficulties, to tell us that we have one Lord—Jesus—and one Father, and that for this reason we are brothers and sisters!”

“We might think that what unites us are our beliefs and our morality. But there is much more: our principle of unity is the Holy Spirit.”

Then in a passage aimed at overcoming divisions in the church, Francis told believers: “Let us begin anew from here; let us look at the church with the eyes of the Spirit and not as the world does. The world sees us only as on the right or left; the Spirit sees us as sons and daughters of the Father and brothers and sisters of Jesus. The world sees conservatives and progressives; the Spirit sees children of God. A worldly gaze sees structures to be made more efficient; a spiritual gaze sees brothers and sisters pleading for mercy. The Spirit loves us and knows everyone’s place in the grand scheme of things: for him, we are not bits of confetti blown about by the wind, rather we are irreplaceable fragments in his mosaic.”

Elsewhere, he said, “unless there is tight organization and a clear strategy, things fall apart,” but “in the church, the Spirit guarantees unity to those who proclaim the message. The Apostles set off: unprepared, yet putting their lives on the line. One thing kept them going: the desire to give what they received.”

He said that it is important to remember that God “acts not by taking away, but by giving.” He explained, “If we have in mind a God who takes away and imposes himself, we too will want to take away and impose ourselves: occupying spaces, demanding recognition, seeking power. But if we have in our hearts a God who is gift, everything changes. If we realize that what we are is his gift, free and unmerited, then we too will want to make our lives a gift.”

Indeed, he said, it is “by loving humbly, serving freely and joyfully,” that we “we will offer to the world the true image of God.”

He concluded with this prayer: “Holy Spirit, memory of God, revive in us the memory of the gift received. Free us from the paralysis of selfishness and awaken in us the desire to serve, to do good. Even worse than this crisis is the tragedy of squandering it by closing in on ourselves. Come, Holy Spirit: you are harmony; make us builders of unity. You always give yourself; grant us the courage to go out of ourselves, to love and help each other, in order to become one family. Amen.”