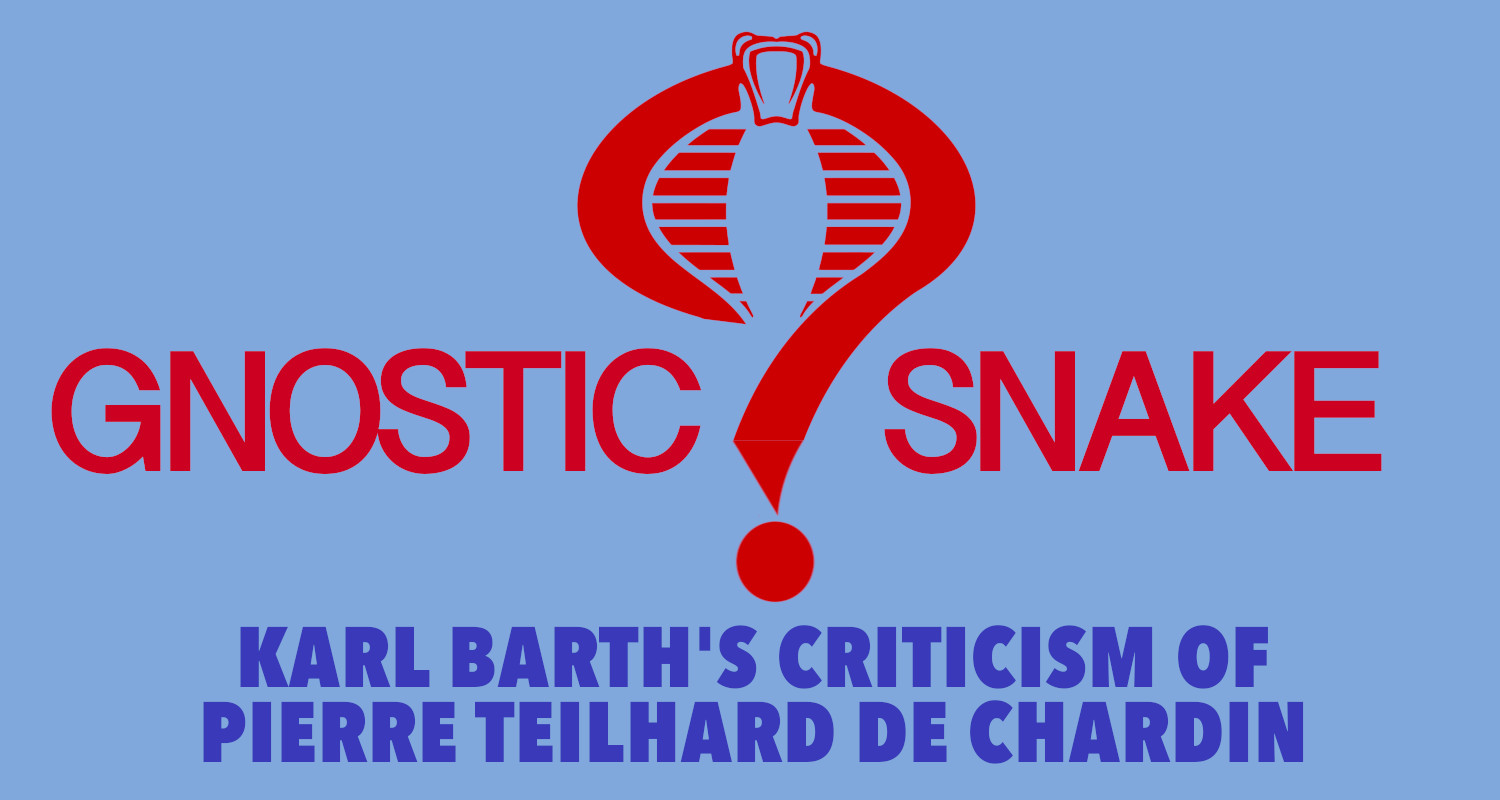 Protestant theologian Karl Barth wrote two famous letters in August 1963 wherein he condemned Pierre Teilhard de Chardin SJ (1881 – 1955) as a “giant gnostic snake” that has swallowed up Jesus Christ in order to worship the “deity of evolution”, and that Emil Brunner is a “harmless blind-worm” in comparison to Teilhard de Chardin! These two letters were written by Barth in the 1960’s, after he had completed his maturest theological works, and have caused Teilhard de Chardin to receive a bad reputation.

In the letter to his daughter-in-law Marie-Claire Barth dated August 17, 1963, Karl Barth wrote:

As concerns T. de C. [Pierre Teilhard de Chardin] I let myself be oriented first by the book Le milieu divin. Now it seems at first quite harmless when you write that what you find so exciting in him is not the theological material but the anthropological and palaeontological. Why should we not learn from a man who knows so much about these things? But then (even according to your own presentation) he moves on at once from his scientific observations to the unfolding of visions of a cosmos that is rising up from darkness to light; to the concept of a gigantic development in whose context Christ too plays an important role at certain places—but in such a way that he too must accept being evaluated and understood in terms of the context. This is precisely what Gnosis in every age has done with Christianity—always with the intention of bringing in what is distance from it and finally elucidating it.

Anthroposophy is doing the same today, and so is the Bultmann school with its existential theology (which has strangely reached its climax with the Honest to God of the rosy-cheeked Bishop Robinson of Woolwich and the hundreds of thousands who swallow it). This is also the aim of so-called spiritualism, whose task it is to prepare us for increasing light after death by means of increasingly intensive purifications, our body being scornfully left behind here below. Always new and giant snakes by which the poor gospel of the Old and New Testaments must let itself be gulped down—and always with lofty eulogies on the way this will help to spread it among the children of the world. Believe me, dear and good Marie-Claire, the Milieu divin of your T. de C. [Pierre Teilhard de Chardin] is a giant gnostic snake of this kind—a giant snake compared with which the brave rationalism and moralism of Brunner’s eristics is a harmless blind- worm. If I said No! then as loudly as I could, do I not really have to do so now? [1]

Georges, I am a little disturbed that you seem to set such high store by Teil. de Ch. [Pierre Teilhard de Chardin] I had to write a letter about him yesterday to my fine daughter-in-law in Indonesia, née Frommel, who seems to be even more captivated by that man and his work than you, and who hopes that by way of his scientific observations, philosophical constructions, and religious visions, she will be able to reach the heart of her father, who has a total aversion to the church, theology, missions, etc. Always apologetics at the root of Gnosis!

For having read the book Le milieu divin (and having no desire to read further), it seems unmistakable to me that in T. de C. [Pierre Teilhard de Chardin] we have a classic case of Gnosis, in the context of which the gospel cannot possibly thrive. The reality that is supposedly manifest there, and that we are supposed to believe, is the deity of evolution—naturally decked out with the name of Jesus Christ, as always happened and still happens in Gnostic systems. [2]

My (Damien Mackey) favourite of all critiques of the gnostic de Chardin are Douglas Farrow’s must read:

The Problem with Teilhard