No Bull – Taurus in Lascaux caves 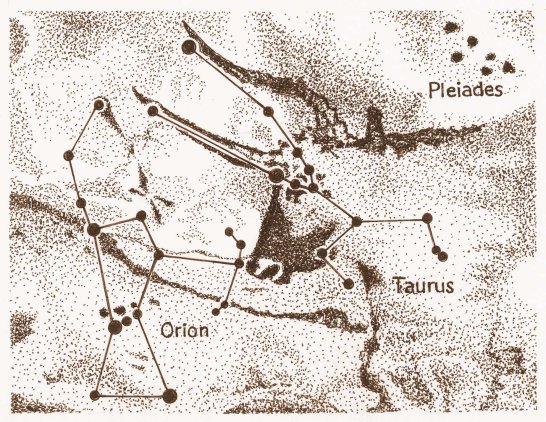 “Chantal Jègues-Wolkiewiez … has proposed that the [Lascaux] cave paintings

record the constellations of a prehistoric version of the zodiac

The possibility that constellations, specifically Taurus and the Pleiades, were represented in the artwork of the Lascaux caves has been suggested before. Luz Antequera Congregado first suggested in her doctoral thesis in 1992 that the dots above the shoulder of this bull depict the Pleiades (and that the dots on the bull’s face are the neighbouring Hyades).

Keeping this in mind we may then go to another theory about Lascaux art, and the leaning bird-man image to be specific, which suggests that he and his bull represent the old myth of Yima and the Primordial Bull. Mary Settegast in Plato Prehistorianmakes this brilliant suggestion. This Yima figure is found in Hindu India as Yama, Persia as Yima, Norse lands as Ymir, and always there are the associations of the primordial bovine, the identity of Yima as a first ancestor, and as the lord of the dead, and usually there is the creation of the world from his body. The Indo-European root of this name means “Twin”, and Gemini (“twins”) is from this same root. This is where I fuse the two aforementioned theories into one, and an increasingly solid hypothesis begins to reveal itself.

The Twins constellation, Gemini, is located next to Taurus, the Bull. Gemini consists of two long straight lines leaning at a 45-degree angle with respect to the ecliptic, while the majority of Zodiac figures stand upright at culmination. The Bird Man also leans at this angle, and is drawn from two long straight lines. He is certainly in the right position relative to the Bull.

The Rhino in the painting (believed my Mary Settegast to represent the Death Principle in the myth) is in the location of Leo, and with some delight we observe that the back parts of the Rhino map perfectly onto the formation of this constellation. ….

there is this intriguing article:

Episodic Survey of the History of the Constellations

A somewhat recent proponent of an astronomical interpretation of the Lascaux cave paintings is the independent French researcher Chantal Jègues-Wolkiewiez who has a PhD in Humanities. (Like all persons who make any type of study of this nature she is termed an archeoastronomer/ethnoastronomer.) Her investigations first began in 1992 with the Chalcolithic period cave engravings in the Vallée des Merveilles. In 1998, in partnership with Jean-Michel Geneste (Curator of Lascaux cave), she began studying the caves and Paleolithic ornamented shelters in France. The particular research study was conducted in 1999-2000.

From this she believes she has uncovered evidence to demonstrate that the Paleolithic painters were astronomers. (Over a wider period of 7 years, Jègues-Wolkiewiez visited 130 cave sites featuring Paleolithic drawings, identifying believed solar alignments throughout the seasons, and leading to her claim that 122 of the 130 sites had optimal orientations to the solstitial horizons.) At the 2000 international conference on cave art in Val Camonica, Italy she made the claim that the people who painted the Lascaux cave were astronomers and that they also painted a zodiac on the walls of the cave. She has proposed that the [Lascaux] cave paintings record the constellations of a prehistoric [sic] version of the zodiac which also included solstice points and major stars. I think that Frank Edge also claimed that Lascaux’s Hall of Bulls pictured the stars of the ecliptic. (“Lascaux, View of the Magdalenian Sky.” by Chantal Jègues-Wolkiewiez (Symposium of Cave Art, Val Camonica, Italy, 2000.) The study was based on a series of astronomical measurements. They used astronomical software to recreate the night sky at Lascaux 17,000 years ago [sic], and models of the modern Western constellations. They made measurements of the astronomical alignments of the cave paintings and also compared the outlines of the paintings in the Hall of the Bulls with the night sky in Magdelenian times. (For a (French-language) summary of her work and conclusions see: “Lascaux planetarium prehistorique?” by Pedro Lima (Science & Vie, Number 999, December, 2000.) Her central claim is the Great Hall figures comprise a prehistoric zodiac. ….

Interestingly, during the first decades of the 20th-century the French prehistorians Marcel Baudouin and Henri Breuil speculated about the possibility of constellations being represented in prehistoric art. (To a considerable extent Alexander Marshack and his ideas of Palaeolithic lunar calendars (developed during the 1970s) fostered renewed interest in the possibility of Palaeolithic constellations.) During the last decades of the 20th-century they were followed by the Swiss engineer Amandus Weiss, the astronomer Heino Eelsalu, and the German art historian Marie König who considered the possibility of constellation representation in the Lascaux cave art. Also, the eccentric German ethnologist Leo Frobenius in his book Kulturgeschichte Africas (1934) conjectured that the animals painted in the Magdalenian caves of Southern France and Northern Spain represented stars. Largely forgotten are the proponents of astral theories, Morris Spivack (Morris J. (Redman) Spivack) (1903-?) (Cosmic Dance at Lascaux: New Theory of Paleolithic Art and Religion, 13-page hand-typed manuscript filed in the Library of Congress, 1961, but also published in French and English), and Elaine Mills (The Prehistoric Puzzle and the Key to Paleolithic Art, unpublished Junior Honors Project in Anthropology, May 1972 – August 1973, Sweet Briar College). However, the main proponents remain Luz Antequera Congregado, Frank Edge, and Michael Rappenglück (and more recently Chantal Jègues-Wolkiewiez). All were involved in independent and lengthy research prior to their first publications.

Luz Antequera Congregado, Frank Edge, Michael Rappenglück, and Chantal Jègues-Wolkiewiez converge on some similar ideas. However, each of them utilises a different level of speculation. Luz Antequera Congregado largely bases her ideas on the application of the art-historical approach and does not employ archaeological or astronomical analysis. Frank Edge also utilises art-historical and psychological approaches as well as simple constellation projections onto particular paintings. Michael Rappenglück applies a wider interdisciplinary methodology. Chantal Jègues-Wolkiewiez uses multiple methods of astronomical analysis (including astronomical measurements and constellation projection). ….

“Painted on the wall was a bull, a strange bird-man and an enigmatic bird on a stick.

Dr Rappenglück realised to his amazement that these outlines form a map of the sky!

The eyes of the bull, bird and bird-man represent … Vega, Deneb and Altair”.

At: https://www.buckinghamcovers.com/celebrities/view/371-.php where we learn about the research of Dr. Rappenglück, we might be surprised to read – in light of our Part One:

https://www.academia.edu/39307461/No_Bull_-_Taurus_in_Lascaux_Caves – the article’s claiming that: “It wasn’t until 2000 that the world realised there might be more to these paintings than first met the eye”.

This might remind one of the claim in the flyleaf one of David Rohl’s books that he was the first to have conceived of a revised ancient chronology.

It was well before 2000, and before Dr. Rappenglück, that such conclusions were being drawn.

Anyway, the article tell this of Dr. Rappenglück’s conclusions:

16,000 years ago [sic], our ancestors painted spectacular drawings of Ice Age animals on the walls of their cave dwellings in Lascaux, central France.

When archaeologists first found the paintings back in 1940, it was a hugely exciting discovery. But they didn’t know then the full extent of what they had unearthed.

It wasn’t until 2000 that the world realised there might be more to these paintings than first met the eye. German researcher, Dr Michael Rappenglück believes that the paintings were more than just decorations. The caves could also be a prehistoric planetarium, where mankind first charted the stars.

He stumbled on this while exploring one region of the Lascaux caves known as the Shaft of the Dead Man. Painted on the wall was a bull, a strange bird-man and an enigmatic bird on a stick. Dr Rappenglück realised to his amazement that these outlines form a map of the sky! The eyes of the bull, bird and bird-man represent three prominent stars: Vega, Deneb and Altair.

Put together, these three stars are known as the Summer Triangle because they are so incredibly bright during the summer months. During the Ice Age, the Summer Triangle would never have set below the horizon and would have shone even brighter than today. It’s no wonder our ancestors were captivated. “It was their sky, full of animals and spirits”, says Dr Rappenglück. So on the walls of their cave, it seems, they drew a map of the prehistoric cosmos.

That wasn’t all. Dr Rappenglück went on to find another Ice Age animal in the stars. Nearer the entrance of the Lascaux cave complex is a splendid painting of a bull. Dr Rappenglück says this too holds secrets to the sky. Hanging over the bull’s shoulders, is what genuinely looks like a map of the cluster of stars called the Seven Sisters (Pleiades). And then, inside the bull itself, there are spots that seem to represent other stars. Incredibly, this part of the sky today is the constellation of Taurus, the Bull. It seems our Ice Age ancestors were the first to recognise the bull within the stars.

Dr Rappenglück found another star map in Spain, on the walls of the Cueva di El Castillo cave in the mountains of Pico del Castillo. A long-ignored curved pattern of dots on one wall appears to be a map of the Northern Crown constellation.

He may even have found a link between Far Eastern festivals of stars and the caves of the Ice Age. Rappenglück noticed a series of pits on the floor of a cave at La Marche, France which seems to be in the shape the Seven Sisters star cluster. He wonders if the small holes were filled with animal fat and set alight to mimick the flickering stars in the sky. That set him thinking. “Perhaps this is the origin of the candlelit festivals of the Far East where lighted candles are held in the shape of the Pleiades. Perhaps it is a tradition that stretches back tens of thousands of years into our Stone Age past”.

The world is amazed and excited with Dr Rappenglück’s research. Archaeologists who looked at his conclusions agreed that they are reasonable. It seems Dr Michael Rappenglück is the man to have uncovered the earliest evidence of human interest in the stars.

3 thoughts on “No Bull – Taurus in Lascaux caves”